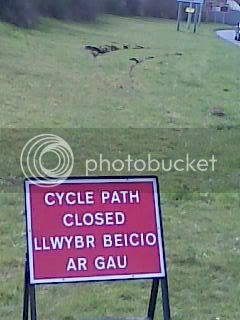 When I do have to get on my bike and cycle to the station in Bridgend, I do find that I come across some interesting things. In this case [due to brake failure on the car] I come across this useful piece of advice at the end of a cycle path. Cycle Path Closed? How about - Cycle path would be closed if it was ever built and opened?
Just thought you'd like that.
Posted by Unknown at 17:22 No comments:

If you've already watched RST, then you'll know that the Autotest film is missing it's voice over. To counter this, I re-processed it and got it ready to put up onto a new dedicated RST channel on Mogulus. Trouble is that I did it in high quality, and the result is that I have a 4 gigabyte file instead of a 600 megabyte file... and the former won't fit.
In short, watch this space, and also look out for a dedicated website coming soon.
Also, someone pointed out that if you're not a blogspot member, you couldn't post a comment here on the blog. I'm sorry if that's stopped you before now, I have now set it so that anyone can comment and give their opinions.
Posted by Unknown at 16:59 No comments:

Latest video to hit the web is now online - you can watch it via the Mogulus player on the front page. Be warned though, it's a biggy at just over 20 minutes long. It also marks the first studio based video on this site.
I'd be lying if I said everything went smoothly. Trying to operate the studio with only 4 people and a presenter was hard, and the end result is still a little rough around the edges, but with a bit of work [and more people/time/money] I think something great can be achieved with it. Big thanks to Ulrich, who has composed the music in double quick time, Tim for turning up and generally keeping everyone stay focused, Dave for becoming a floor manager in a hurry, and Matthew for making his presenting debut with what I admit is not the easiest script!
Now, anyone want to buy a 4 part pilot motorsport magazine series?
Posted by Unknown at 10:20 No comments:

Mogulus is a new system for me - it's a live streaming set up, effectively gives you your own TV channel on the net.

So I uploaded my showreel and a few other videos to it to see if I can get them to load quicker... I'd appreciate your feed back on it too.

So either visit www.mogulus.com/kmshowreel or with any luck, use the player below.

Having filmed all day at Llandow Yesterday, it came as something of a nasty surprise when I got to the interviews which I'd recorded - having set the shot up nicely, got the exposures right, Ulrich had perfected the sound, and the subject spoke brilliantly and gave great answers to our question, with lots of enthusiasm for the car we were talking about.

Which one? I'm not telling you yet!

Anyway, the nasty surprise. Dropouts. Lots of them, getting steadily worse. Starting at about 40 minutes in. The problem was with the recording, due to dirt on the heads, we think, and is totally unrecoverable. I can't even understand the interview to transcribe it. It's a crying shame.

And the cause of this? Wierdly it's the brand of tape that I use. I have been using TDK tapes in the Z1s, and only since then have I had problems. Strangely enough the little JVC palmcorder runs the TDKs with no problems at all. It's all down to the lubrication the tape manufactuers use, or more accurately, the mixing of different lubricants from different manufactuers resulting in a sticky gunk all over the record heads. Apparently Uni have been aware of this for about a year - not that anyone thought to make a notice to us about it - and with a certain electronics supplier selling 10 packs of TDK on offer recently, the problem is now more frequent than before.

In the meantime, I now have to find a way of getting a 6 minute feature from what I've got left.

p.s. If anyone knows anyone who can lend me a motorcycle/motor racing driver's crash helmet for a couple of days to do a film shoot, please send them my way. It's not essential but it would be nice! Thanks in advance.
Update : I went to see my lecturer in Uni, and about half an hour after I told him of the problem, there was a notice up on Blackboard [a system my uni uses] warning other people of the problem! Amazing how quickly things get done if you talk to the right person isn't it?
Posted by Unknown at 10:51 No comments: