I'm amazed. I have no permanent job, and yet I find myself very busy all of a sudden. Next week I start work filming a masters Student's film in Newport (which will mean I chalk up yet another camera type onto the kit list), There's cadet projects, Graphics for Glamorgan Student Societies and a motorsport blog, a race meeting to marshal, Wales Rally GB, and the small matter of getting a job. And none of that brings me any money!

At least no one can accuse me of being lazy...

oh yes, and if you look down on the right, you can see that I'm experimenting with Twitter, I have so far gained 6 Followers. I did note that some Twits(?) have a tendency of advertising, so they got blocked very quickly... the current 6 I haven't sorted through yet... there would appear to be a F1 Magazine, the BBC News Magazine (!!), a racing driver who was at Goodwood (Hello to you, if you're reading this, hope you enjoyed the event!) and a couple of others.
Posted by Unknown at 17:44 No comments:

Something that I've been doing with the air cadets lately is doing media relations work. Recently I sent out a press release after a successful event for the squadron's swimming team. Here's the result! 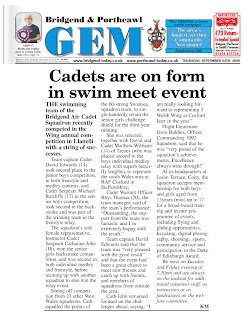 click here then turn to page 27
I think I'll keep an e-scrapbook!
Posted by Unknown at 13:17 No comments: 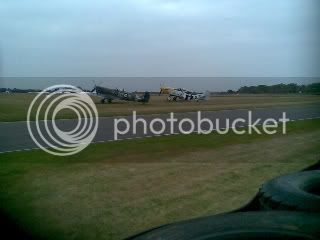 Well folks, I'm back from Goodwood. Thanks to Martin and Chris on Post 6F for a great meeting with the flags.
None of us had done 6F before, and we were amazed to find it at the end of one of the aerodrome's runways. We were then surprised by an aeroplane coming in to land about 20 feet above our heads!
Then to the track action. The organisers had decided it would be nice to start with a great parade of mods, rockers and police vehicles. so out come the mods on their scooters, the rockers on their motorcycles, and the police in a range of immaculate classic cars, vans and motorcycles.
Unfortunately for the motorcyclists, and I'll include the scooters in that, the first act of the day was going to be an air display by two aircraft in formation - a Spitfire and a Mustang. These two wonderful aircraft come out, perch on the end of the runway, turn their tails towards the track, and at the moment the parade came around, ran the wonderful Rolls Royce Merlin engines up...
... sorry about the quality by the way, didn't have my usual camera to hand, only my mobile phone, but you should be able to see the mods on their scooter being blown all over the place by the planes!
After enjoying the first lot of practising, I took some time off to look around the circuit. In my orange hi viz kit, I felt more conspicuous than usual... it was like steeping off a flying saucer! The majority of visitors had dressed like something out of the 1960s, and with the old style advertising, cars [post 1966 vehicles are banned from the site and can be forcibly removed!] and racing, it felt like stepping back in time. Which is of course, the whole point. Sir Stirling Moss had turned 80 on Thursday, and was around the track surrounded by autograph hunters. His parade on Sunday involved lots of waved flags [in celebration, since it wasn't an actual race], a 8 gun salute from the Royal Horse Artillery, a greeting from Buzz Aldrin who had landed earlier in the day to judge the aviation concourse, the entire crowd singing happy birthday in an attempt to drown out Lord March's sister's singing, and a rendition of "Rule Britannia" in a style that I'd never heard before. And I don't particularly want to hear it again, thank you very much. I'd rather listen to the engines attached to the Vulcan, which came over and drowned everybody out, including Lord March's sister!
Sir Stirling himself was every bit the British Hero, and dismissed the question of whether he might slow down a little with the answer "Well I'm only 80!"
Next year, I'll be back. The Festival of Speed is already a fixture, and the revival is sure to match it. I think I'll don a period costume though.
Posted by Unknown at 18:42 No comments:

I said something ages ago about the nearby Valleywood studios...
... Well, Not sure what it is yet, but there's a lot of activity going on up there now. Prehaps someone's moved in and are producing something good...? Anyone got any information?
And with that, I'm off for a week. I'm going to Goodwood for the fantastic Revival meeting. See you when I get back
Posted by Unknown at 17:31 No comments:


This may surprise you, but I've always liked aircraft as much as I've liked cars. I'm also quite fond of boats as well [why do you think I have a kayak?] This is one of the factors that influenced my decision to become involved with the air cadets. Anyway, since I am also now the radio officer with my local squadron, I thought it would be rather nice if I could find some radio call signs from civil aircraft in the area, show the kids real radio use in action, that sort of thing.
What I found, was the South Wales Aviation Group's website logging all the air traffic in the area. Fantastic! Just what I was looking for. Then I spotted a posting about a new helicopter flight simulator in Cardiff...

I have received an email and some pictures from Duncan McDonald at Veritair concerning their simulator initially assumed to be G-USTA ..It appears this is partly correct however on examination of the pictures below it appears to be 2 frames merged together ..the silver and black bits are definately from G-USTAquestion is can anyone identify the rest of the machine please.

Interesting indeed, and it turns out to be the return of a television star of the late 80s. No, not Duncan McDonald - G-USTA. Which is a helicopter. That was enough to spark the interest into researching where the thing had come from in the first place.
Remember "Treasure Hunt" by Chatsworth? The one with Anneka Rice running all over the place jumping out of helicopters? Well Chatsworth went on to produce a sequel, "Interceptor"
You can find out more about the programme on the fansite, which also has details about the aircraft used in this similarly aviation heavy format, this time using a big Augusta 109 haring around the place at low level, flown by re
luctant TV star, Michael "Mikey" Malric Smith - who also featured in "Treasure Hunt" and "The Flying Gardner". The aircraft itself was owned by Castle Air Charters, based in Cornwall and a prolific supplier of aircraft for use in film and TV, both as stars and also as camera ships. Indeed one of their aircraft was recently spotted over Cardiff filming something, and another one features on one of the BBC one idents. The Helicopter used in Interceptor was a menacing black machine with a yellow stripe down the side, registered appropriately as G-MEAN.

"Interceptor" didn't enjoy the long life of it's predecessor [or it's successor "The Crystal Maze"] and the helicopter was soon declared surplus to requirements by Castle air charter. The yellow stripe became Silver, and in recognition of the manufacturer, Augusta, it was re-registered G-USTA. Then it was sold.
Then the new owners crashed it... and Castle bought the wreck back to use as spares... Well they're expensive things, Helicopters, shame to waste them!
And so it came to pass that in 2006, the producers of BBC's "Casualty" film a storyline involving an "air ambulance", which was another member of Castle's fleet, G-BVCJ - the aircraft used in "The Flying Gardner". The script called for that aircraft to crash... so what do you do? Wreck hundreds of thousands of pounds worth of aircraft, or find a wrecked airframe to substitute for it? Not hard is it? So G-USTA received yet another re-paint, on one side only to double for it's sister, why use expensive paint on something if the camera won't see it? After filming there's not much point in re-painting it back again, so it sits around in a curious hybrid paint style waiting for something to happen.
Then Veritair look for a suitable A109 to become it's flight simulator... well what's this? a stripped out airframe just ready for such a purpose! they buy it, but the paint work [and the fact that half of it looks rather more like an American air ambulance] confuse them. They ask SWAG if they can identify the other helicopter that has been mixed with G-USTA... I find the post, ask around on the Interceptor fansite... and find out what's happened.
So there's a mystery solved. And an old TV star thus finds new employment.
Posted by Unknown at 16:58 No comments:

Hurrah! The website is fixed now with the proper address... Welcome to all the visitors who couldn't get on, and I'm sorry that you had to wait so long!
Posted by Unknown at 13:15 No comments:

... and a following wind, the site should be back up and available at the usual address very shortly. Let this tale be a lesson to all domain owners. If it's useful and you've paid for it to be in use... Then DON'T CANCEL IT UNTILL IT EXPIRES.
I have now spent another £11.50 on getting this problem fixed when I could have just kept it at £4 for 2 years.
To say I'm a little bit annoyed is an understatement. Never mind though.
Youtubians... you'll note that How to be a racing driver is now up on the tube. Watch out for some new material, coming soon. Oh yes.
Posted by Unknown at 17:59 No comments: