5000 views for one of my videos! Hurrah! Curiously though it's not the one I was expecting...

click here to see it
Posted by Unknown at 13:03 No comments:

Sunday was a fun day's filming. As part of a series for Wheelnuts on the lesser known motorsports, I spent the day at Llandow filming the Bridgend Automobile Club's Autotest event. The filming itself went very well indeed. and after lots of editing [most of which completed by Sunday evening] I recorded and added the voice over to it on Monday, and it should be up later on Today. Probably in the early hours of Wednesday.
A big thanks to Dean, Tom, Chris and Tony for helping out with participating in the filming by the way!
A new skill I managed to pick up in the edit is that of being able to blank out number plates, or indeed anything. It's somewhat time consuming, but the effect looks good, and is certainly not that bad for a first go.
Until the video arrives then, here's a pair of screenshots. You'll get the good stuff soon, honest! 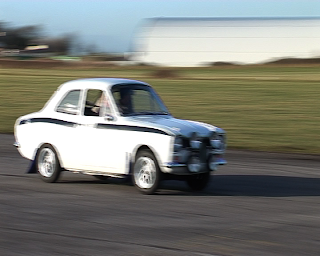 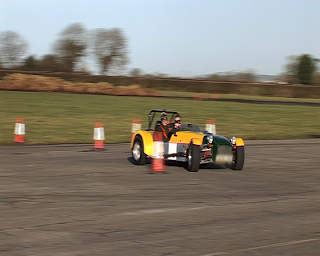 Well. Two new videos are now online - keeping me up untill 6am in the process. The Ducks - which you can view Here are also watchable in HD format. Which is nice. Sadly the sound on the other video was removed by Youtube because of a copyright problem, so I shall have to find a replacement for it.
I'll update the "New Videos" page soon to reflect the change in videos on there.
Posted by Unknown at 12:05 No comments:

Amazing what little gems you can find on the internet isn't it? BBC News are reporting that tomorrow is the most depressing day of the year.

That figures, I feel very depressed already!
So, a group of Optimists [yes, a group] are determined to do something about it:

BBC News
And good on them for doing so. Besides if anyone can find a way of cheering up Paxman, then they are on to a winner and why didn't they do it years ago.
To keep you happy. Monday will have 2 new videos. The first is a bit of fun with the Dogcam and my regular Cardiff to Bridgend commute, and a nice bit of Deep Purple. The other is something to prove I can film something other than cars, and something I hope you can all relax to - a nice bit of bird watching at a local nature reserve with some relaxing music from Vanessa Mae. Underage Coots are not allowed to watch it though. They'll be on the New Videos Player with any luck sometime tomorrow. [Monday]
Posted by Unknown at 22:00 No comments:

17 views already! I wonder how many of them were me?
Couple of problems which I've noticed. Some of the links for some reason don't work on the Documentary page and the Acreddited media page ... well all of them don't work in fact. That will be sorted with the next update, along with a RSS Feed from this blog on the home page, and a few other new things. Like a proper links page.
I get the feeling things are going well on the website front
Posted by Unknown at 11:09 No comments:

I found this story on the BBC News page today.... and it doesn't make for nice reading when you are, like me, trying to get into the media and live in Wales.

Mr Davies [MP for Blaenau Gwent] said: "We have seen a haemorrhaging of media jobs at ITV Wales, at Trinity Mirror, with Northcliffe papers, in commercial radio.

"Wales is becoming a media wasteland in which only the publicly subsidised BBC and S4C seem secure. This is very, very worrying for democracy.

It's interesting that the article also says that BBC Wales is in a program of job cuts, especially when I have a job application form for a job at the BBC in Wales on my desk in front of me! Still, I get the feeling that it's going to get even harder to get a job in an industry where it was already hard to get a job. Interesting times indeed.

Time for Something New

Changes are afoot, dear friends. For a start, there's a shiny new blog - available at kevinmcmullintv.blogspot.com - unless you're reading this there... in which case Hello! you've found it.
Secondly, there's a new site in the works. More videos, and a brand new layout, and a brand new home. I hope it will be a big improvement. I don't intend to get rid of my freewebs site just yet though, so you can keep looking at it.
In other words, watch this space.
Posted by Unknown at 18:56 No comments: