... I have been mostly playing with this. 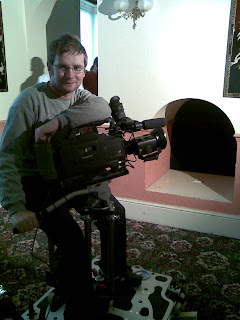 It's a HD Panasonic camera (with a selection of lenses), and it's by far the largest camera I've worked with yet. I love the chance to get my hands on something new, and given enough fiddling time can usually get it going well enough to get some pretty good results. In case you're wondering, it's mounted on a dolly, which is great for tracking shots because you don't have to carry the thing (it's heavy!)

Today I've been wrestling that camera around Newport on a bus trying not to drop it. It is phenominally expensive!

I'll explain more later... Now is the time for sleeping.
Posted by Unknown at 21:23